We quickly forget how American Airlines has landed us at Miami International as soon as we step out of the airport to search for a taxi that is large enough to fit four people with six suitcases.

– “May you take us to the Fontainebleau hotel?” we cheerfully chirp to the driver.

Miami welcomes us with a generous, subtropical sun. As Eric Weiner has put it in his bestseller – ‘Geography of Bliss’:

“There are two seasons in Miami – hot and unbearably hot.”

Thanks to a pre-scheduled trip, we will be spending three days in one of the most iconic and luxurious hotels on Miami’s South Beach only for a couple of hundred dollars (bear in mind that this was in 2007).

As soon as we exit the taxi, a bellman greets us merrily and starts loading the luggage cart with our belongings, while we are still admiring the beautiful building we are about to enter.

“Guys, have you been to the Fontainebleau before?” the bellman asks us with the largest of smiles.

“No, we have not had the pleasure to visit it yet,” I answer.

“Oh, you’re really going to fall in love with it!” he assures us confidently.

*Warning: Before you continue reading, I have to warn you that Miami is a heaven for travel photography. Therefore, pick your best camera and go nuts!

And aren’t we stupefied! We enter into an enormous apartment with a terrace, overlooking both the Bay and the Atlantic Ocean. While we are still trying to comprehend the sumptuousness, the sheer size of the room, and the splendid view, the bellman shoots a quick “Have a great stay!” and leaves us.

In the afternoon, we set off to explore the area around South Beach, Miami. Enormous yachts adorn the bay. Large boulevards criss-cross the area. There is lush greenery and the streets are lined with palm trees.

The only thing that reminds you that you are not (exactly) in heaven is the almost intolerable humidity, which does not change even at night, especially for travellers who are used to dry heat.

Tired of the flight and the hot weather, we decide to succumb to the temptation of the hotel’s sky pool, situated on the 9th floor.

We order refreshing drinks, get some towels and for the rest of the day, we lie cosily on the chaise longues. The first evening of our 3 days in Miami bestows us with a wonderful sunset, which we admire from the balcony.

Just at the tip of the ocean, early next morning, we head to the beach before the sun has become sizzling. Although the beach is excellent, the water is as hot as a tea and, on top of that, the ocean bottom is quite rocky.

After a few dips in the water, we grow tired and opt out for a nap. I warn my friend – Tsvetan – that we could easily fall asleep. And, of course, we do. In an hour or so, I wake up, because my skin aches.

Congratulations to the winners – we are officially sunburnt in Miami – ouch!

Friendly advice: don’t fall asleep at any time on the beach even if you have put sunscreen on (its protection is not powerful enough after an hour under the scorching sun). At least, the boardwalk next to the beach is quite the stroll.

In the afternoon, we set out to further explore South Beach.

In the evening, we head downtown. With the sun setting down, road traffic has begun to intensify and a lady putting her make-up in her car, while waiting at traffic lights, is a regular sight. On a serious note, traffic in Miami can get quite crazy, so make sure you’re alert all the time to avoid unpleasant situations.

While downtown, we learn that the yacht docks are a must-visit, so this is our next stop. As we get around the docks and marvel at the fabulous boats parked there, we take some night shots and decide to indulge in a couple of (virgin) cocktails while watching a live performance by a Spanish-singing band.

The last day is quite hectic as we’ve scheduled a boat & bus tour of the Sunshine City, and we have a plane to catch in the evening.

The boat trip starts from downtown and passes by high-rise residential buildings overlooking Biscayne Bay, Miami. The captain, who also provides the passengers with interesting facts about the things we travel around, informs us that the rents and costs of an apartment in those buildings are very expensive. No wonder why.

Soon after that, we reach the port of Miami. It is one of the largest cargo ports in the United States and number one passenger port worldwide. Thus, two of its monikers are the “Cargo Gateway of the Americas” and the “Cruise Capital of the World”.

Immediately after Dodge Island, where the port of Miami is located, we pass by Fisher Island. The island is a census-designated place which is accessible only by a private boat or a ferry – there are no roads or causeways connecting the island to other islands or to the mainland.

The tour continues around the man-made Star Island. “Many celebrities, such as Gloria Estefan, Sean Combs, Vanilla Ice, and Shaquille O’Neal, own or have owned homes on the island,” the captain tells us. One of the houses on the island is worth more than $50 million.

The boat meanders between Palm and Hibiscus Islands and gets us back to downtown Miami.

After the boat adventure, it is time for the bus tour.  It takes us around downtown and continues to Coconut Grove – the oldest incessantly inhabited Miami neighbourhood. It is extremely green, clean, and quiet.

In Coconut Grove is the Charlotte Jane Memorial Park Cemetery, whose previous name was Coconut Grove Bahamian Cemetery. It is a cemetery with a historical significance where the early Bahamian settlers were buried. The guide also tells us a curious fact – it is the cemetery where Michael Jackson shot his “Thriller” video.

After Coconut Grove’s sumptuous greenery, the bus takes us to Coral Gables where we stop at Coral Gables Biltmore Hotel. It is a fabulous hotel very well-known for serving as a hospital during World War II, as a Veteran’s Administration hospital, and as a campus of the University of Miami’ School of Medicine up until 1968.

Next stop is the Coral Gables Venetian Pool – a pool that “recalls design features from the Venetian Lagoon in Italy”. Known as the “Venetian Casino” and opened in 1924, the Venetian Pool was designed and built in an old coral rock quarry. Artesian wells displace some 820,000 U.S. gallons (3,100 m3) of fresh water on a daily basis, which makes it the largest freshwater pool in the U.S.A. The Venetian Pool features an island, a grotto, and two waterfalls.

“Little Cuba” is one of Miami’s nicknames. Hence, our last stop is the Cuban district of Miami where ‘local’ people are peacefully playing domino. In the Cuban district, you can purchase Dominican cigars. Back in 2007, Cuban goods were still under embargo, but due to the recent rapprochement of U.S.-Cuban relations, who knows – probably Cuban cigars will also be sold soon.

And as a conclusion, I have enlisted some helpful tips for those who aspire to visit Miami.

If paradise existed, Miami would probably be one of its suburbs. Bon voyage! 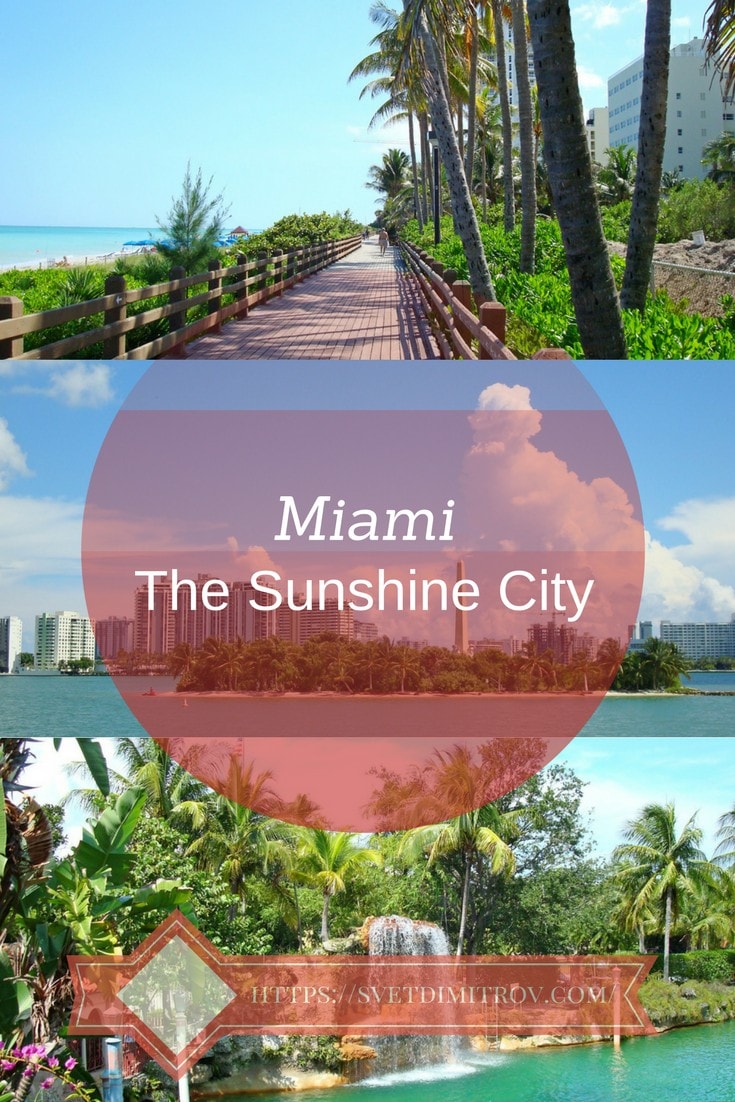 Have you been to the Sunshine City? Did you party hard under the scorching heat?

Work and Travel U.S. Adventures of a 20-Something Bulgarian

87 comments on “Miami – the Sunshine City”