What do Bulgaria and Iceland have in common?

Besides that both countries are situated on the Old Continent and they offer jaw-dropping sceneries, Bulgaria takes the second place after the icy country in terms of diversity and abundance of hot, mineral springs. And since Iceland is quite cold most of the year, Velingrad, lately known as “The Spa Capital of the Balkans”, is a much better choice for your next spa destination.

Not persuaded? Please, allow me to convince you.

The Unique Location of Velingrad

Velingrad is a beautiful town in Southern Bulgaria cosily embraced by the Western Rhodope Mountains.

Standing at around 150 km (93 mi) south-east of Sofia, it is located at an altitude of 750-830 metres (2,461-2723 ft), which is believed to be the best altitude for the body to acclimatise itself to the surrounding environment, to relax, and to revitalise.

The town is the only Spa region in Europe where harmful substances are neither found in the water, nor in the air. Moreover, there is a negative air ionisation for at least 8 hours every day, which rejuvenates our body cells much quicker.

1937 saw the construction of the first, Olympic-size, mineral water pool in Bulgaria, and the second in Europe. The sand, which is scattered around the pool to make a mini beach, was brought from the Sea Capital of Bulgaria – Varna.

The Magical, Healing Waters of Velingrad

Not only Velingrad’s whereabouts and crystal clear, fresh air will make your stay as relaxing as possible, but also it is the curative, therapeutic mineral water of the region that adds up to the magic.

The Manager of the Spa Section of Hotel Rich, a specialist in Physical Medicine and Rehabilitation, shared with us several facts that make Velingrad’s mineral waters inimitable.

In and Around Velingrad – the Spa Capital of the Balkans

The Spa Capital of the Balkans is much more than hot mineral waters, though. Below, I will provide you with some tips what to visit if you grow tired of the spa procedures.

The Historical Museum – A Walk through a Partisan House

It holds many pieces of the town’s history which (the town) was established in 1948 by joining the villages of Ladzhene, Chepino, and Kamenitsa.

The museum was founded in 1952 and was then transformed in Museum-house “Vela Peeva” after whom the town of Velingrad is named. The museum is petite but has many interesting exhibits on display – from traditional Bulgarian clothing and costumes through instruments for decorating Easter eggs to Vela Peeva’s own furniture.

Vela Peeva fought against the fascists and was a stern worshipper of communism. 40-50 minutes will be more than enough to explore it.

The Dorkovo Pliocene Museum – A Stroll around Palaeontology

In 1983, Bulgarian and French palaeontologists excavated the area around the small village. They managed to unearth 5-million-year-old fossils of prehistoric mammals dating back to the geological epoch of the Pliocene.

Some 30 years later, was inaugurated the Dorkovo Museum which is within a walking distance of the village. It is set amongst the verdant ambience of the Rhodope Mountains.

The museum itself has a wooden, domed structure. By far the most interesting exhibit is a full-size model of a gomphothere.

The guide told me that Anancus arvernensis was about 4 metres (13 ft) in height and weighed between 8 and 10 tonnes.

Kostandovo’s Carpet Factory – Where Queen Elizabeth Gets Her Carpets From

Kostandovo is another small village very close to the Pliocene museum in Dorkovo – around 3 km (2 mi) to the south.

Besides being gorgeous, it houses a unique carpet-making factory. What makes it one-of-a-kind, you will ask.

Septemvri – Velingrad – Dobrinishte – The Only Narrow-gauge Railway in Bulgaria

Fancy exploring the countryside around the town?

There is no better way than hopping on the train which travels on the only narrow-gauge railroad in Bulgaria. I strongly suggest you take it to Avramovo which is the highest train station on the Balkans. The ticket from Velingrad to Avramovo is around 2 BGN (1 EUR) for a 1-hour ride, which is ridiculously low.

Bulgaria is one of the few countries in Europe which is a proud owner of these magnificent railways that cut through gorgeous mountains. The slow pace of the train gives you the opportunity to take astonishing photos while meandering through tunnels and lush vegetation. Take a look.

Avramovo takes a truly stupefying position at an altitude of 1,267 metres. The great thing about it is that the highest train station on the Balkan Peninsula is reachable by a car.

In the station’s vicinity by the paved road, you can find merchants that sell home-made delicacies that teleport your Bulgarian-thirsty senses into a mesmerising food space.

Honey, yellow and white cheese, as well as a host of other home-made goodies, such as jams and preserves, await you there. Don’t miss your chance to bargain a bit.

Pashovi Skali – A Panorama That Will Stay in Your Mind Forever

Located in the vicinity of the village of Yúndola are the Pashovi Skali (Pashov’s Cliffs).

Looking southward from Pashov’s Cliffs, a staggering panorama unfolds before your nature-thirsty eyes.

The endless pleats, foliage, and valleys of the Rhodope Mountains are on your left.  Picturesque villages and verdant meadows, majestically overlooked by the Rila and the Pirin mountains, are to the right.

The Avramovo village and its saddle are the geographical borders between the Rhodope Mountains and the Rila Mountains. That’s also the reason why the narrow-gauge railways cuts exactly through that region.

The hike to the cliffs takes you through a verdant forest and it takes around 25-30 minutes from Yúndola. You just have to follow the marks on the trees.

Belmeken Dam – The Highest Dam on the Balkans

It seems the area around Velingrad holds many records. Besides Avramovo – the highest train station on the Balkan Peninsula, there is the Belmeken Dam (or Belmeken Reservoir), which also takes “high” pride in being the highest dam on the Balkans.

The dam is a part of the cascade Belmeken – Chaira – Sestrimo and stands at 1,923 metres (6,309 ft). One can put his tent out for a camping in the proximity of the dam or hike to the peak with the same name – Belmeken. Its altitude is 2,626 metres (8,615 ft). There is a paved road that reaches the dam. From there, the hike to the peak takes around 3-4 hours.

If you are just going to contemplate the gorgeous scenery around the dam, pack yourself with a jacket even in summer because it’s extremely windy.

Velingrad hosts numerous spa hotels with great service and food. However, if you are yearning a secluded, yet luxurious stay, Villa Vuchev is your place to go.

The 5-star villa, which for a third consecutive has won the Luxury Holiday Villa of the Year 2017 – Bulgaria of the British “LUX Magazine”, is a place of resplendence and opulence but in a very unpretentious way.

Whenever one books a room there, the whole villa remains closed for the visitor. You might want to get some company, though, as the dining room, the bar, and the pool are to die for.

Arte Spa & Park Hotel, located on the outskirts of Velingrad at the foot of the verdant forests, is a magnificent place to unwind and swim your stress away.

The area around the hotel is characterised by fresh and crisp, mountainous air with high ionisation.

The hotel possesses a stupendous spa centre where I really enjoyed the herbal sauna. There, lavender and thyme kept me company. Additionally, the indoor and outdoor spa facilities kept me busy and refreshed.

The personnel is courteous and friendly. The morning and dinner buffets come with plenty of choices for meat lovers, as well as for vegans and vegetarians.

What I loved most, though, was the intricate wooden interior and the paintings, adorning the walls, which made me feel like I was walking through an art gallery in the woods.

Food is an indispensable part of every stay at a certain location. You don’t need convincing about that, so I will show you several photos for all types of people – meat lovers, vegetarians, and vegans. Velingrad has it all.

Since the population around Velingrad includes Muslims, the local cuisine has epitomised sheep and lamb steaks as their “seduce me until I start dripping saliva” delicacies.

The steaks are something between juicy and succulent and make your mouth water.

To enjoy the scrumptious beans and the juicy steaks, you have to pay restaurant “Mehanata” a visit. It’s also known as “Механа Демеко” or “Mehana Demeko”.

And one last tip. Before you start packing your bags, bear in mind that August and December are the busiest months so book in advance!

I usually do not revisit places because the earth is teeming with hidden gems to be discovered. Nonetheless, I keep coming back to Velingrad time and again. Its ideal location, appetising food, and wonderful amenities make it my favourite spa destination.

I cannot wait to visit it again soon. And so should you!

Are you ready to dip yourself into Velingrad’s hot mineral waters?

*Disclaimer: I went to explore the Spa Capital of the Balkans on an invitation of the Velingrad Municipality and its Centre for Tourism Information. The meals and accommodation were provided by Villa Vuchev, ARTE Spa & Park Hotel, and Mehanata. However, all opinions and suggestions are strictly my own. 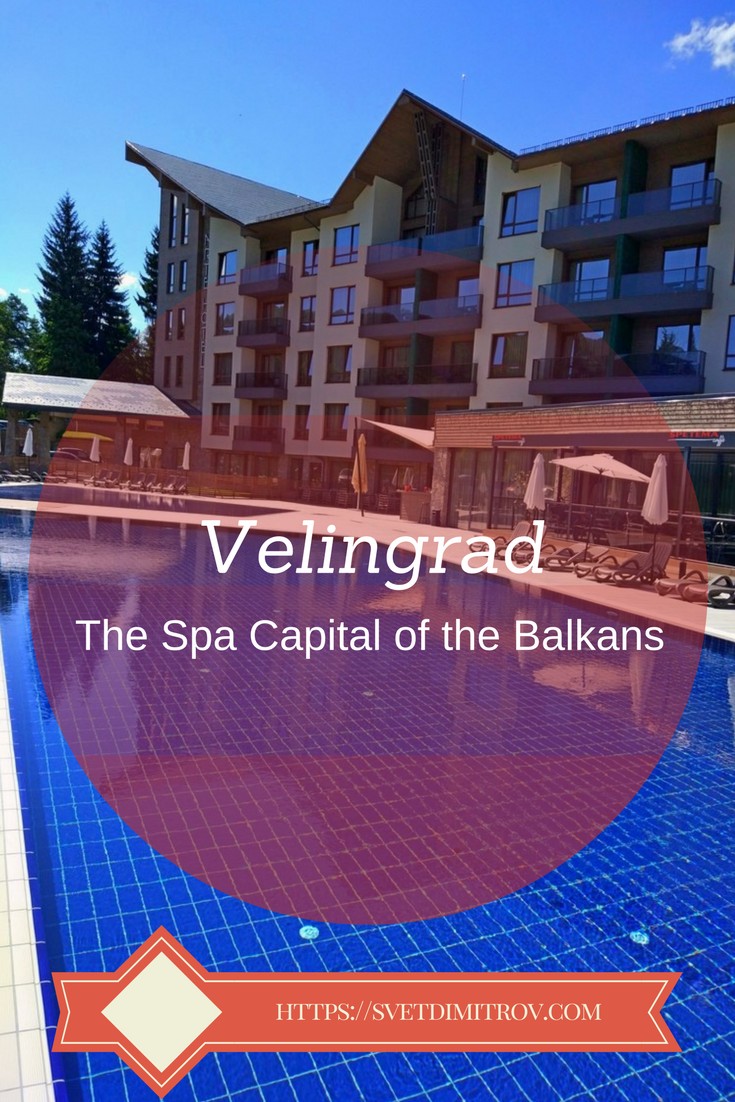 22 comments on “Velingrad – the Spa Capital of the Balkans”