This post will tell you the fascinating story of Cabyle – an ancient thracian settlement.

If you like diving in history, you’ll love the information and photos in this article.

Before moving to the antique village of Cabyle, I’ll first narrate you a short story about Yambol, the town in whose vicinity the Thracian village is located, and its Bezisten.

Yambol – A Town of Thracian History and Hangover Food

Yambol’s location in South-East Bulgaria on both banks of the Tundzha River gives it a favourable climate with fertile lands, which attracted settlers since ancient times.

Its ancient history dates back millennia before the Bulgarian state was established. Some of the earliest archaeological findings can be traced to around 6,000 BC – the time of the reign of the Roman Emperor Diocletian. It was then when the castle with the name Diospolis (town of Zeus) was erected near the location of contemporary Yambol.

Throughout time, the town’s name changed a couple of times – from Dianopolis, Dabili, Dampolis, and Diospolis to the modern name – Yambol. Today, the town, also an administrative centre of the region with the same name, built in the heart of the Thracian Valley, epitomises culture, history, traditions, and customs.

On a side note of history, the town is home to the shkembe chorba – an emblematic soup largely believed to be an amazing hangover remedy – and the best Bulgarian halva.

The Bezisten – a Look in Ottoman Times

Yambol’s most symbolic monument is its bezisten (безистен) or the bazaar, founding its origins in Ottoman times. Erected in the 15th century during Emperor Bayazid II the Protector’s sway, it is a gorgeous, covered market and the only one of its kind in Bulgaria.

“Bezisten” from Farsi (Persian language) literally means “a place where fabrics and garments are sold”.

History of the Bezisten in Yambol

Immediately after its inception, it turned into a centre of commercial life, and history described it as one of the liveliest and most beautiful marketplaces in the whole Ottoman Empire.

Between the 16th and 17th century, the Bezisten was the Ottoman Empire’s granary. Around 1799, the town of Yambol was attacked and set on fire. An interesting fact is that the only remaining building, due to its solid base and thick walls, was the Bezisten.

Yambol was one of the essential military bases of the Ottoman throngs during the Liberation War and it was then when the Bezisten became a depot for provisions. After a while after the war, it restored its functions of a craft and commerce area. In 1972, soon after its final overhaul, the Bezisten was pronounced a cultural monument with a national significance.

Nowadays, the building serves as a Tourism centre and an exhibition hall which holds ancient artefacts from Prehistory (5,000 BC) through the Thracian era to the Romans.

Due to its excellent acoustics, frequently, it is a venue for various events, such as concerts and live spectacles. The stunning architecture of the building is noticeable from a distance.

A golden coin (as seen in the photo above), part of the second oldest golden treasure in the world, behind the Varna Necropolis (also found in Bulgaria), is an exhibit in the Bezisten. In addition, it also holds gorgeous icons (also pictured above) from the 18th and 19th century, depicting Jesus and his mother.

Without any exaggeration, Bulgaria has one of the richest histories in the world, spanning a time frame, going back 7,000 years ago – from the ancient Thracians to the Romans.

Located at around 8 km (5 mi) north-west of the town of Yambol, National Archaeological Reserve “Cabyle” (sometimes spelt as Kabyle or Kabile) covers an area of more than 60 hectares. It is in close proximity to the highway A1 from the Pan-European transport corridor and there is a large parking in front of the reserve.

The ancient Cabyle was the most significant and largest from all the ancient Thracian towns and is the only one in Bulgaria that is fully restored. The Bulgarian state is super rich in architectural artefacts and ancient places but most of them are hard to reach and explore.

Cabyle gives its visitors the unique opportunity to take them on a tour through time and history. The historical bus “stops” at Prehistory, Thracian era, Hellenistic period, Roman era, and Early Middle Ages.

Founded around the end of the second millennium BC near one of the sharp turns of the Tundzha River, it was an important cultural, religious, and an economic centre in the South-eastern part of Thracia due to its location at an ancient crossroads.

The ancient town was named after the Mother Goddess Cybele and stands at the foot of Zaichi Vrah (“The Rabbit’s Hill”).

Archaeological Museum Cabyle – A Walk in the Past

The reserve’s museum immerses visitors in an atmosphere with archaeological relics from prehistoric times to the Early Middle Ages.

Every year around the Day of Yambol (June 20th), the museum and the National Archaeological Reserve “Cabyle” host the Fair of Tourist Attractions and Animations. It re-creates historical events and showcases Roman and Thracian arms, as well as fighting techniques from the distant past.

Around Cabyle and Its Landmarks

Cabyle reached its zenith during the Roman era when it constructed its own sewerage and drainage systems. The population reached 4,000, which was quite large a figure for that period.

The town nowadays holds the remnants of barracks, Choreum (a building where the grains were kept), thermal baths, and a large Basilica. The ancient temple was unearthed from 1972 to 1976. The gigantic measures of the Basilica, as well as its murals, frescoes, and ornate decoration are proof that it had been a Chief Episcopal church.

At Zaichi Vrah near the serrated rocks, there is a geothermal anomaly which makes people catch their breaths and normalise their heart rates quicker.

It is a very magnetic area. I also felt quite charged and relaxed at the same time just by being there for around 15 minutes.

I would like to conclude by saying that it is difficult to transfer all the magnetism with which this place was charged. So, if you would like to feel its energy, the best way is to visit the place.

If you’d like to download a GPS version of Yambol and Cabyle, you can do it here.

*This was part of a press trip of ASTOM on an invitation of the Ministry of Tourism of Bulgaria.

Have you been to any ancient Thracian village? What impressed you the most? 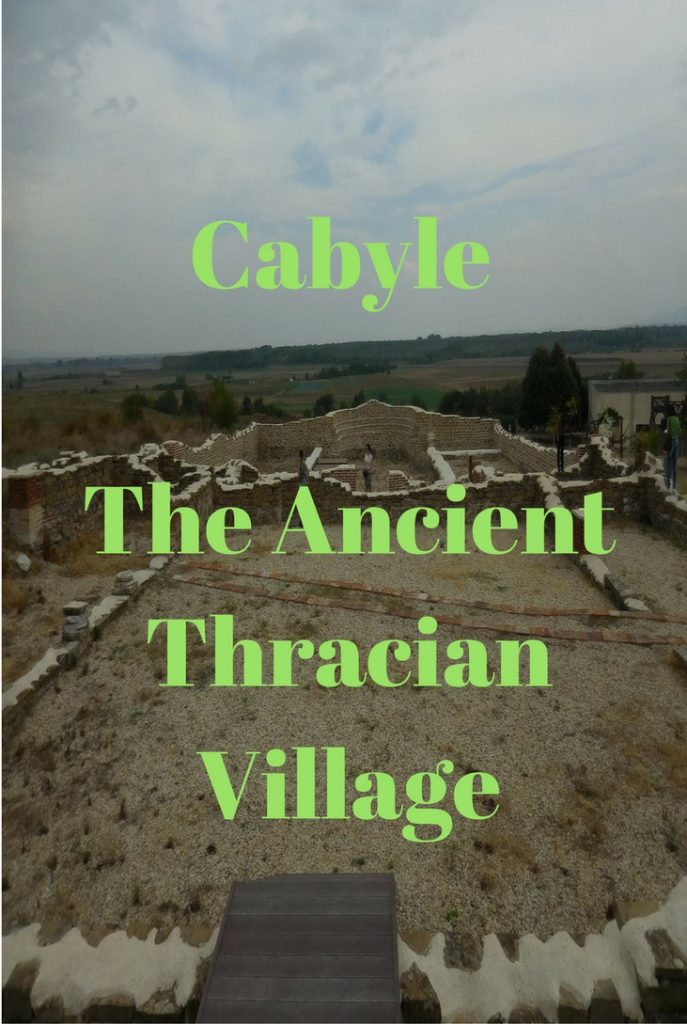