If I told you that you can cycle like crazy for an hour by drinking only one glass of water, would you believe me?

I wouldn’t believe myself either.

But if that glass is not only filled with water but there are also some tiny chia seeds inside?

Oh, that would make an enormous difference!

Origins and Peculiar Information about the Potent Chia Seeds

“Chia” is stemming from the Nahuatl word “chian”, which means oily.

Characterised by opposite leaves, chia can be defined as tall, annual herb, which reaches up to 1.75 m (5.7 ft) in height. Chia seeds’ flowers are white or purple and come in numerous clusters that are united in a spike at each stem’s end.

Finding its titanic origins in central and southern America, the chia seeds are broadly consumed owing to the various health benefits.

Chia seeds nestle their tiny presence in the category of “Superfoods”. Literally meaning “strength”, they are most frequently consumed in the form of seeds, which can be combined with almost kind of nourishment – food, drink, smoothie, juice, etc.

The Ancient History of the Tiny Titans

This superfood was made use of by some of the most antique cultures and civilisations worldwide as a splendid energy supplier. The Mayan heralds and ambassadors used to always bring a bagful of chia seeds with them throughout their lengthy and wearisome trips.

The tiny titans would replenish Maya people’s powerful bodies with fresh energy and aid them in recovering much quicker, performing much huger quantities of physical activities. Mapping out this superfood’s usage back in time, we discover that ancient civilisations observed visible outcomes and enhancements in people’s fortitude, stamina, and overall endurance while consuming chia seeds.

Mexican people claim that 1 spoonful of chia seeds is capable of charging an average person with energy for 24 hours.

Despite the fact that people in the past were hindered to explain why these petite titans are so unique, the ancient Maya persisted on using them and continued witnessing the improvements associated with their overall physical conditions.

Nowadays, nonetheless, we are already capable of dismembering the seeds under a microscope and placing them under a set of laboratory experiments to find out the “dirty” secret behind their miraculous body effects.

Chia seeds’ dirty little secret lies in the fact that they are unbelievably hygroscopic. This adjective means that not only the seeds soak up to 12 times more water than their actual size, but also they hold the water for a really long time. This fact prolongs the body’s hydration and keeps and protects the electrolytes within the organism. And not being well-hydrated counts as one of the most common causes of loss of energy and fatigue.

This really distinctive characteristic of the tiny titans makes them incredibly beneficial for individuals who love putting their bodies through highly intensive training programmes regularly.

Athletes and professional sportsmen are not the only people who can derive great advantage of the numerous benefits of these petite titans.

Chia seeds are revered in the health community for their wealth of fibre, proteins, essential fatty acids (omega-3 and omega-6), minerals, and vitamins.

The Tiny Titans are also comprised of other essential fatty acids (such as alpha-linolenic acid and linoleic acid), strontium, mucin, Vitamins A, B, D, and E, and various minerals (iodine, iron, sulphur, magnesium, manganese, niacin, and thiamine) – which are an abundant source of antioxidants.

In regards to 6) and 8) from the health benefits, it is imperative that you either:

I personally soak them in advance (see image below) and add them to my powerful smoothie. I also add the seeds to a tarator – a cold yoghurt-based soup, consumed in Bulgaria and elsewhere in the Balkans.

How do you satiate your hunger with the potent chia seeds? Do you have any preferred recipes? 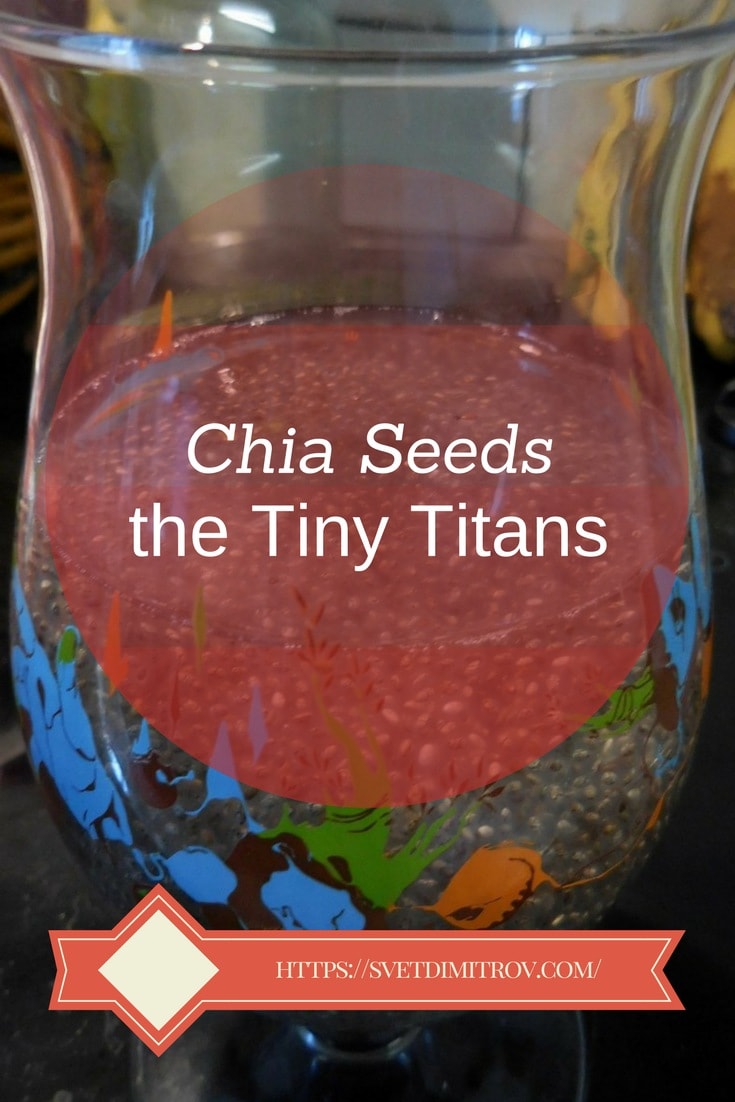 Turmeric – a Wondrous Condiment with a Host of Health Benefits