Today, I am going to recount you a story about one of my favourite towns in Bulgaria – Karlovo (I am a proud Bulgarian in case you didn’t know yet). I was wondering how to walk you around this petite, yet verdant and undeniably gorgeous, town. For a favourite place, one should really be convincing. Thus, I decided to let my heart paint this story, hoping that its aorta would supply you with the travel oxygen you are always craving.

Gracefully scattered around the southern foot of Stara Planina mountain, Karlovo fascinated me from the first time I set my tired feet on its soil. “Why were they tired?”, you might ask.

If you have read my article about the annual hike, following the footsteps of Vassil Levski, Bulgaria’s national hero, you might already know the answer. If you have not read, I encourage you to do it as it depicts a legend, and is generously accompanied by heart-stopping, booty-shaking, and pants-dropping vistas (earth-quaking and house-rocking, too).

So, I trotted its picturesque streets back in 2004 when I took part in the hike for the first time. After that, I have been there more than five times, and every time it felt more and more pleasant.

Karlovo bears a significant importance in Bulgarian history since Vassil Levski, the person who is to be “blamed” for the liberation of Bulgaria from the Ottoman Empire in the end of 19th century, was born there. I tend to be in Karlovo on July 18th – the birthday of Levski – the official end of the hike you just read about above.

The modern town’s origins can be traced back to 1483 at the place of Sushitsa village (today, it is a part of the town). Its importance expanded in the middle of the 19th century as it became one of the centres for revolutionary activities and Bulgarian culture.

Following the Batak massacre at the commencement of the April Uprising, the British writer, illustrator, and a nurse – Lady Strangford – came to Bulgaria and constructed several hospitals, including one in Karlovo.

Levskigrad (after Vassil Levski) was the name of Karlovo between 1953 and 1962.

Embraced by the well-known Valley of Roses, famous for the cultivation of roses for centuries and accounting for more than 80% of the world’s rose oil, Karlovo lies at 386 metres (1,266 feet) above the sea level.

On the north, Karlovo is protected by the staggering Stara Planina mountain, which not only provides a fresh whiff in the hot Bulgarian summers (usually, temperatures in July are more than 30 °C or 86 °F) but also immensely adds to the town’s charming beauty.

Its location is quite favourable as it sits at less than a 2-hour drive (140 kilometres (87 miles)) east of the Bulgarian capital, Sofia, and at 60 kilometres (38 miles) north of Plovdiv, the second largest Bulgarian city and European Capital of Culture for 2019.

Karlovo’s Charm and What to Do

I find it very peaceful when I am sauntering around its small, winding streets. Karlovo’s people (karlovchani) are one of the friendliest I’ve ever encountered. Owing to their sociability, they would stop you and have a chat with you. They would do in a hassle-free and unperturbed way which would definitely make you feel you are at home.

Don’t be misled by the size of the town. Despite that it is not more than 30,000 people, there are several things one might do there.

*Disclaimer: This is not a paid post. The names of the places I mention here are based on my personal experience.

I have two favourite places in Karlovo – a restaurant and a pastry shop.

The restaurant is called “Edit”. I decided to share it with you because it is one of the finest restaurants I have ever visited in Bulgaria.

First of all, it has a splendid garden with gorgeous and fragrant flowers, and offers a stunning view of the mountain.

The second thing one notices, immediately after the outstanding setting, is the impeccable service provided by the staff. Armed with beaming smiles and positive attitude, they are able to serve even the most fastidious of customers.

Thirdly, Edit has an amazingly rich menu with fine examples of Mediterranean and Mexican dips, fresh pasta, and scrumptious pizzas. In addition, it not only offers international cuisine but also typical Bulgarian delicacies, such as tarator and grilled meats. I am just going to mention the desserts with one word – mouth-watering. Every time I order one, I am drooling.

And finally, can you imagine that all this comes at very reasonable prices? Yes, it does. Don’t forget to leave a generous tip to that charming waitress.

At their Facebook Page, you can see more of their delicious dishes.

Je t’aime (Жутем in Cyrillic) is located very close to the city centre of Karlovo, but it’s a bit hard to find. Just ask some of the locals and they will show you where it is.

I was certainly in heaven when I entered the shop – there were literally tonnes of delectable cakes on display, plus some other typical pastries. Again, the prices are more than affordable and the quantities are gigantic.

I am sharing only one photo now because you will start planning your sweet-tooth journey there and blaming me for going to the dentist after that, he-he.

The Eighth Wonder is a show, carried out by National Folklore Ensemble Bulgare. Indeed, it is their last spectacle which was performed for the first time in Karlovo on July 17th 2016.

Ensemble Bulgare’s Eighth Wonder includes a movie, narrated by the British person Ben Cross, a long-time resident in Sofia, who plays James Bourchier. The audience is watching excerpts of the movie where Mr Bourchier explains the beauty of the richest and inimitable Bulgarian folklore. After each explanation, there is a performance by the Ensemble.

Taking photos during the show was forbidden, but I managed to take a couple. Sorry, I could not resist. 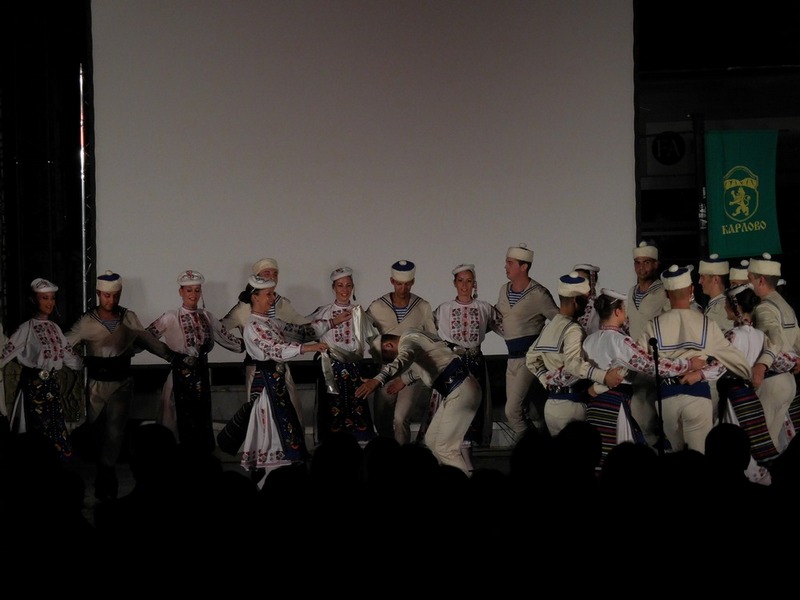 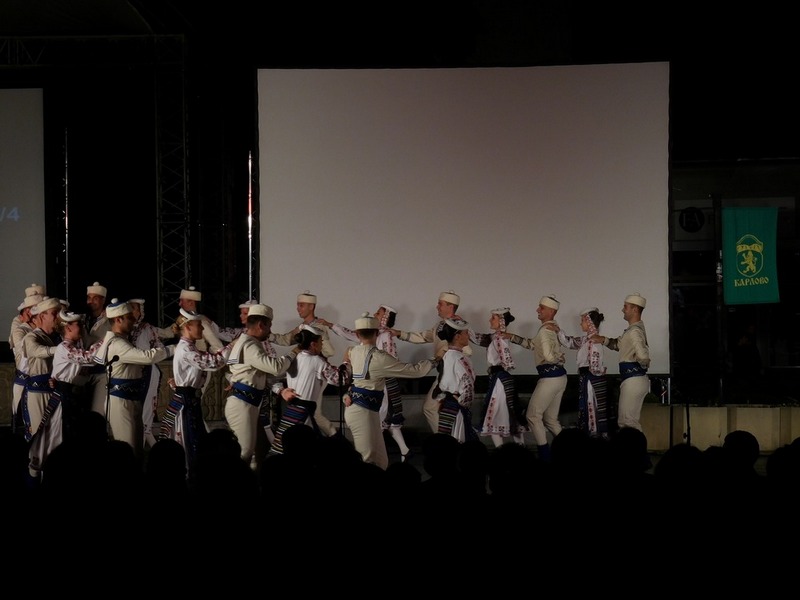 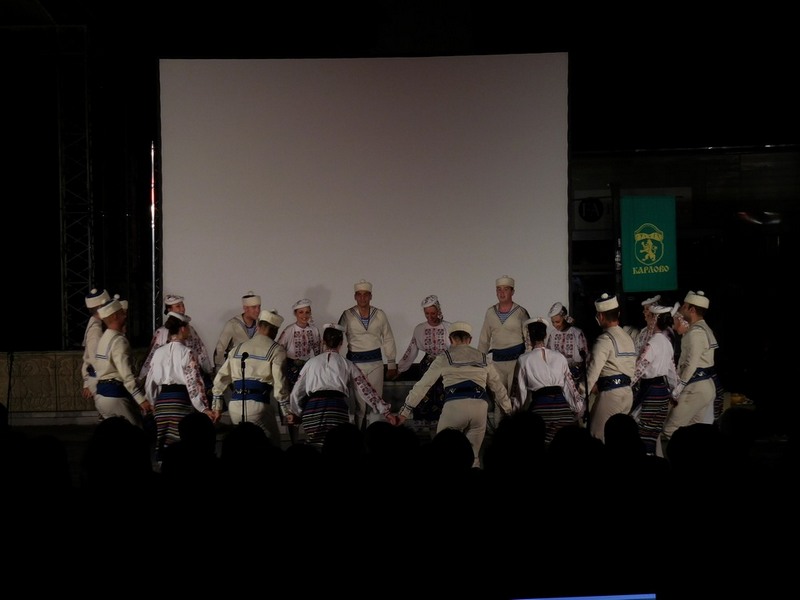 I usually leave captions under every photo but these three are just too beautiful to comment. You can just contemplate them in silence.

If you have not been to Karlovo yet, I am sure I sparked your interest. It’s the perfect weekend getaway. What do you think? 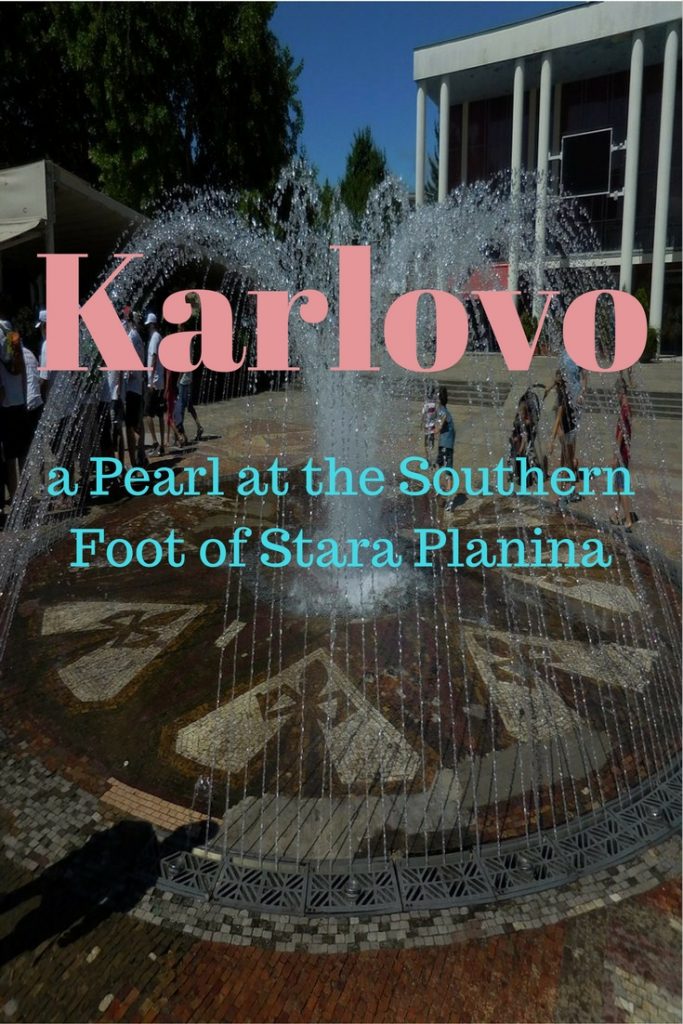