Thousands of books have been written on Vassil Levski, his magnificent feats, and deeds of valour. I would like to share with you the most important highlights of his humongous role for the liberation of Bulgaria from the Ottoman Empire, why he is still honoured today, and why he is deemed “The greatest Bulgarian of all times” for his self-sacrifice.

Short Biography of Vassil Levski – the Apostle of Freedom

Vassil Ivanov Kounchev (known as Vassil Levski later on) was born on July 18th, 1837 in Karlovo, Bulgaria. In 1845, he commenced his education at the religious school in Karlovo. At the fragile age of 14 years, his father left his earthly being to join the angels, and Vasiliy Karaivanov – Levski’s uncle – began taking care of him.

Between 1852 and 1854, Levski lived in the local, holy wood convent and studied church singing. From 1856 to 1857, the young man studied at the priestly school of teacher Atanas Ivanov in Stara Zagora. Later, he was given the monastic rank deacon with the name Ignatius. In 1858, he was ordained hierodeacon and became a cantor in the church “Virgin Mary” in Karlovo.

Levski’s Revolutionary Years – a Time of Hardships and Repressions

What made this man, with probably a bright future in the ecclesiastical circles, immerse himself in revolutionary activities? Here, we should pay tribute to another great Bulgarian rebel – Georgi Sava Rakovski – who at that time had initiated powerful propaganda activities, having a strong influence on the Bulgarian youth, including Levski.

In 1861, following the economic crisis in the Ottoman Empire and the carried out economic policy, suppressing the Bulgarians, a shake-up in the revolutionary world occurred. Stoil Popov from Kalofer and Levski made some of the first efforts to regroup their people in order to fight for freedom. However, at that point of time, the Bulgarian society was extremely unprepared for an uprising, and the first attempt of the Deacon (as Levski is known) failed.

At that moment, Bulgaria had already been under the Ottoman Empire’s rule for almost 400 years and people were growing tired of the atrocities and mayhems of the Turks. The Bulgarians were secretly craving their freedom and Vassil Levski sparked that fire.

For us, Bulgarians, Vassil Levski is an outstanding man and a proud Bulgarian. He was not only a freedom fighter, but also a defender of human rights. Early in his life, he understood that freedom is not given, but should be earned. He believed in his people and that they deserved a better future.

Despite his first unsuccessful attempt to organise rebellions, on March 3rd, 1862, Levski left his hometown for Serbia to join the First Bulgarian Legion, organised by Rakovski. According to a legend, during military exercises, he made a jump over an enormous pit (a leap of faith, if you like). For that, he was given the name Levski („Левски“. „Лев“ in old Bulgarian means lion).

In 1864, on the eve of Easter, Deacon Ignatius said farewell to monasticism forever by cutting his hair himself and removing his cassock. This act, committed before his closest friends and relatives, was extremely symbolic. Levski made a radical turn in his life and devoted himself to revolutionary actions – an act which turned him into the Apostle of Freedom.

From 1864 to early 1867, he was engaged in teaching activities in different Bulgarian towns (Voynyagovo, Enikyoy and Kongaz). Meanwhile, he was working on the revolutionary propaganda and he was preparing local bands that provided resistance to the Turkish and Circassian robber gangs. In the spring of 1867, he moved to Romania, where on the recommendation of Rakovski, Levski was appointed standard-bearer in the detachment of Panayot Khitov.

It is no coincidence that Vassil Levski is the only historical figure in the Bulgarian, centuries-old history who had been given the name APOSTLE – as much as for his selfless devotion to the cause of national liberation, as well as for his exceptional, moral purity and spiritual elevation. In our consciousness, his image is an icon.

The spirit of Levski is everywhere. Having gathered the cry of the oppressed and the selfless sacrifice of the revolutionary man, he had won the battle against time – because he knew that if he won, “the whole nation would win”.

Focussing His Arduous Efforts Inside Bulgaria

Levski realised that every help and support, coming from abroad, is driven by interests. Therefore, from Romania, he undertook a visit to a number of Bulgarian towns, including Plovdiv, Perushtitsa, Karlovo, Sopot, Kazanlak, Sliven, Veliko Tarnovo, Lovech, Pleven, and Nikopol. There, he met with people he trusted, probed the public attitudes and the preparedness for a revolution.

In 1869, with the help of Danail Popov, one of the most active persons in the revolutionary movement in the 1860s and 1870s, he initiated a committee network. The first committee was founded in Pleven. Soon after that, committees were created in Lovech, Troyan, Karlovo, Kalofer, Kazanlak, Plovdiv, Sopot, and Chirpan.

Later in 1869, Levski and Lyuben Karavelov founded the Bulgarian Revolutionary Central Committee in Romania in order to woo other countries into helping Bulgaria – this is what Karavelov thought was of utmost importance, while Levski’s convictions were that the main burden should lie within the Bulgarian people.

Why Vassil Levski Is Revered as the “National Hero” of Bulgaria

Vassil Levski inspired (and continues do so) us with his organisational abilities, consistency, and conviction in his deeds. With copious amounts of energy and tireless work, he had been disseminating his revolutionary ideas among Bulgarians. He had a strong discipline which he imposed on all his followers. Levski was a person who was capable of understanding and leading people. For us, Bulgarians, Levski is a role model.

He believed that his dream to see his people equal with other nations in Europe will come true. The thought of the Deacon “To be equal with other European nations” for us means to be united and confident in our own forces.

On the day of Christmas 1872, Levski arrived in Lovech where the committee was in dire straits. The police were sniffing around, and meeting with the President of the local committee – priest Krastyo – was next to impossible.

According to the generally accepted thesis, Levski was betrayed by priest Krastyo. The Apostle of Freedom was captured by policemen, surrounding the inn. The Deacon tried to fight his way through the shooting, but was wounded and captured.

From Kakrina he was returned to Lovech, then he was taken to Veliko Tarnovo and Sofia, where he was sued. Before the court, Levski held very firm and did not share any details about the organisation, taking full responsibility for the activity on himself.

On February 18th, 1873, in the outskirts of Sofia, Vassil Levski was hanged by the Turkish authorities. In the last moments of his life, he made a confession before the vicar of Sofia – Father Todor. In his confession, he said: “Whatever I have done, it was in people’s favour.”

He asked for forgiveness from him and from God, and kindly asked to be mentioned in the prayers of Bulgarian people as Deacon Ignatius.

The priest Hristo Stoilov told us about the last moments of Levski. “The Deacon behaved valiantly. He said that he really was the first, but after him there were thousands. The executioner threw the rope and kicked the stool.”

A worthy life is dignified, a holy sacrifice is a sign of immortality. On February 19th, 1873, Vassil Levski – the Apostle of Bulgarian Freedom – began his journey to immortality.

The Epic Hike and the Drop-dead Gorgeous Views Everywhere

Now, I know this was a bit long, but writing this evoked tears in my eyes. Tears of honour, of respect, of happiness, but also of sadness. I hope I have produced the same feeling in you. Let’s go to the fun part now – the hike.

22 years ago, two persons, among which a person with the very same first name (Vassil Kopchev), started a hike in the mountains following Levski’s footsteps as a way to both honour his deeds and pay respect to Mother Nature and its jaw-dropping creations.

Since then, the hike has been held every year and from two persons then it grew to more than 220 persons, divided into six different groups (you may have noticed I used persons instead of people – this is because every single person, taking part in the hike, bears a unique personality, a true follower of Levski).

The hike takes the participants around the verdant and adrenaline-rising mountains of the gorgeous Stara Planina (the Old Mountain) or Balkans (this is where the name of the peninsula comes from).

Each group has a different route and different starting date, but all of them unite on July 18th, the birthday of the Apostle, in his hometown, Karlovo, to bestow their honour to the Apostle of Freedom.

Since 2004, when I first took part in the hike, I have been a part of Levski’s followers for seven times, including 2016. What was more special this year, is that I was also a leader of one of the six groups. I had the great honour to lead an amazing bunch of proud, young Bulgarians (and one Russian friend) through the mountains – I climbed, ate and drank, and sang rebellious songs with them. This is a feeling which reverberated and resounded in my head weeks after the hike saw its end.

I thought of describing our route in detail, but since this article turned out to be quite long, I will satisfy myself with just posting several many drop-dead gorgeous photos.

I will end this article with insights of some of the participants:

“What is Vassil Levski for you?”

Levski for me is the brightest example of abnegation, elevated to sacred heights ideologist, excellent organiser; a personality who is an amalgam of a number of role models – freedomlust, perseverance, and fortitude. And an incentive for a person to find/understand something about him/her by following his footsteps.

What is Levski for me? An idea! A great reason to team with people with whom there is no need to hide my personality because I know they are there for the same thing. We are there for the earth and the feeling to step on it. Many people love our country for its glorious past, because of the pride it brings them. However, for me, Levski is not only a person with a historical meaning. He is the feeling when I am doing the last step of climbing the steep mountain peaks.

For me, Levski is an emanation of the native spirit, a proof that we were, we are, and we are yet to be… better, more loving, more dedicated, and at least for a little while to touch him and his ideas.

Levski… Levski for me is the legacy to be, a promise of love for our country, fortitude and faith in the people. Appeal for rigour towards me as a personality and invariability to me as a Bulgarian. “We need actions, not words!”

Have you heard of Vassil Levski? What does he mean to you?

PIN ME OR ELSE… 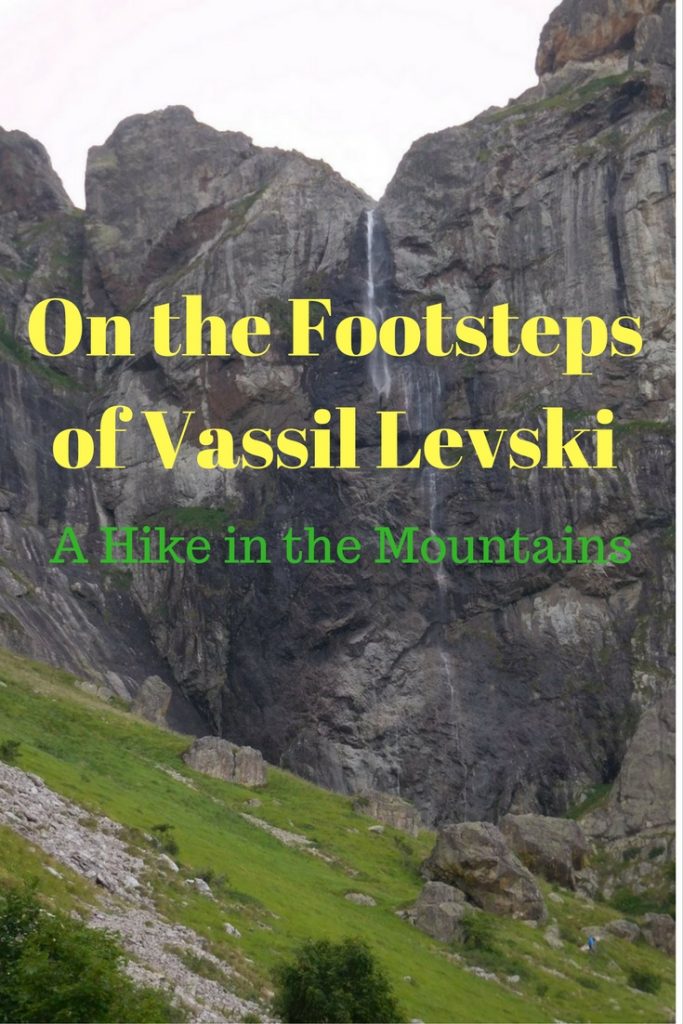