The Big Apple. New Amsterdam. The Capital of the World. Gotham. The City So Nice They Named it Twice. New York – a city of superlatives.

I remember the first time I saw the skyscrapers of the New York Times (I remember it so vividly because it was the first real skyscraper I have seen). I had to bend my neck in order to see the top of this steel gargantuan.

Some of the buildings around it seemed oddly familiar because I had seen them on many TV shows, movies, and/or photos. Yet, New York City is much more than just a bunch of lined skyscrapers.

After our adventure in Miami, we arrived late in the evening and rushed to check in the hostel before midnight. That proved to be impossible as there was a horde of people trying to do the same thing.

A little disheartened by this queue, we were calmly waiting and suddenly we saw three friends, whom we had not seen for ages, from our hometown. They were standing outside the hostel. What a small world!

We immersed into a quick chat and planned a day of exploring with them. After a couple of hundred minutes waiting and a few rounds of “diplomatic negotiations” at the reception, we got admitted and immediately hit the beds. That’s because we had less than three days to explore probably the most cosmopolitan city in the world.

Day 1 – the American Museum of National History and Central Park

My friends were not too happy because it started raining in the morning of our first day of roaming around New York, but I could not care less.

If there was a place where I would be happy to be rained upon, that place would be New York City. While we were gaily marching the large boulevards and avenues that crisscross Manhattan, we were amazed by the architecture around.

The American Museum of National History

I don’t know how we had decided that we would devote time to museum visits, but the first stop of our short journey was the American Museum of Natural History (AMNH), located on the Upper West Side of Manhattan.

Back in 2007, our group was not the wittiest in the world, I would have to admit. Even though we spent more than 3 hours of quick glancing at museum exhibits, we were not able to cover even a third of the AMNH, which is one of the largest museums in the world. At least, we managed to take some great photos.

Central Park – the Lungs of Manhattan

If you only have 2 days in New York City, I would not recommend spending almost a third of a day in exploring a museum – it is very exhausting. Plus, there’s so much more that you can do in NYC.

Not only that the number of exhibits is enormous, but the information at one point becomes overwhelming. It was time to immerse ourselves into the beautiful Central Park, also known as “The Lungs of Manhattan”.

It has been maintained by the Central Park Conservancy, a private, not-for-profit organisation since 1980, and is the most frequently visited park in the United States with more than 42 million visits.

We started the promenade in Shakespeare Garden, continued the stroll around a very picturesque duck pond, took a shot of the whole group with New York’s skyline, and exited the Park from the west.

A Night Walk around Times Square and the Rockefeller Center

After Central Park, we clumsily continued our New York itinerary to Times Square.

“The Crossroads of the World”, one of its several other nicknames, is a famous intersection in Midtown Manhattan which stretches from West 42nd to West 47th Streets at the junction of Broadway and Seventh Avenue. You will easily recognise it not only by the hundreds of billboards and advertisements around but also by the hordes of people, many of whom – tourists.

At night, it is even more crowded – probably this is one of the reasons NYC is regarded as the “City That Never Sleeps”.

Times Square was followed by a walk around St. Patrick’s Cathedral which, at that time of the day, was closed, and the Rockefeller Center. I have to admit we did a silly thing. We were offered tickets for 18 USD to visit the observation deck and admire the Big Apple at night, but for some reason, we decided it is too much and did not take advantage of that. Oh, well, next time! : )

Wall Street – The Battle Between Bears and Bulls

Our second day, the march started by a walk around the “notorious” Wall Street. It is also the place where the New York Stock Exchange is located. Most of the banks there are open every day. Of course, we did not miss a chance to tuck our hands in the Charging Bull’s buttocks. It is believed that doing that gives you luck. It proved to be quite difficult because of the streaming throngs of tourists ready to satisfy their, gingerly put, “bronze-bull-touching” fetishes. : )

Before we proceeded to the gorgeous Battery Park and took the boat to the Statue of Liberty, we had already purchased a New York City Pass. It is a great way to save money, but you also have to be quite organised so as to visit as many attractions as possible. At the time (2007), it cost only 65 USD.

The Statue of Liberty – the Symbol of Freedom

Our first visit was the Statue of Liberty which was given to the U.S. by France and was built by the same person who had also built the Eiffel Tower – Gustave Eiffel. The Statue of Liberty, representing the Roman Goddess, Libertas, is one of the largest statues in the world and is a symbol of freedom.

If it was not for the magnificent view of Manhattan from there, I’d say it was a bit of a waste of time, especially when you have a tight schedule. I am not saying that you should not visit one of the most famous landmarks in New York, but bear in mind that it takes a lot of time (the whole trip was around 3 hours).

Out of the metro in Midtown Manhattan, we headed to, yes, you guessed right, the Empire State Building. Its name comes from the nickname for New York – the Empire State. The building has 102 stories and is located on Fifth Avenue between 33rd and 34th Streets.

An American culture icon, it was finished back in 1931 and stood as the world’s tallest building for nearly 40 years. A must-visit place in NYC! Take a look at the breath-taking photos I took from the observatory which is located on the 86th floor.

Our tour continued with the Madame Tussauds wax museum. It is located at the very heart of Times Square. It was founded by the sculptor – Marie Tussaud. The process of making the figures, which are of very famous celebrities, royal and historical figures, is very long (around 4 months) and costs around 300,000 USD per figure.

Madame Tussauds Museum is present in many cities around the world – Berlin, Hong Kong, Shanghai, Sydney, Vienna, Wuhan, Tokyo, and many more. I took many photos inside the museum, but I intend not to bore with you more than a couple.

Our last stop was the Madison Square Garden. It is situated on top of Pennsylvania Station in Midtown Manhattan between 7th and 8th Avenues from 31st to 33rd Streets. Madison Square is a multi-purpose indoor arena. We did not see any venues as it was quite late but had a peek inside.

I have not heard of anybody who has been neutral about his or her visit to New York City – they either love it or hate it. The Big Apple is much more than just skyscrapers and avenues. It is a city of many contradictions and contrasts. It is the charm that every big city carries. It is the people that march its streets every day – be it locals, commuters or tourists. It is a fashion capital, an Alpha++ City, a financial and trade centre. Everybody has seen it on TV, but to fully feel its magnetism you have to explore it on yourself. Go ahead – immerse yourself into this vibrant megalopolis and share with me your story.

“Imagine all the people – living for today”
John Lennon 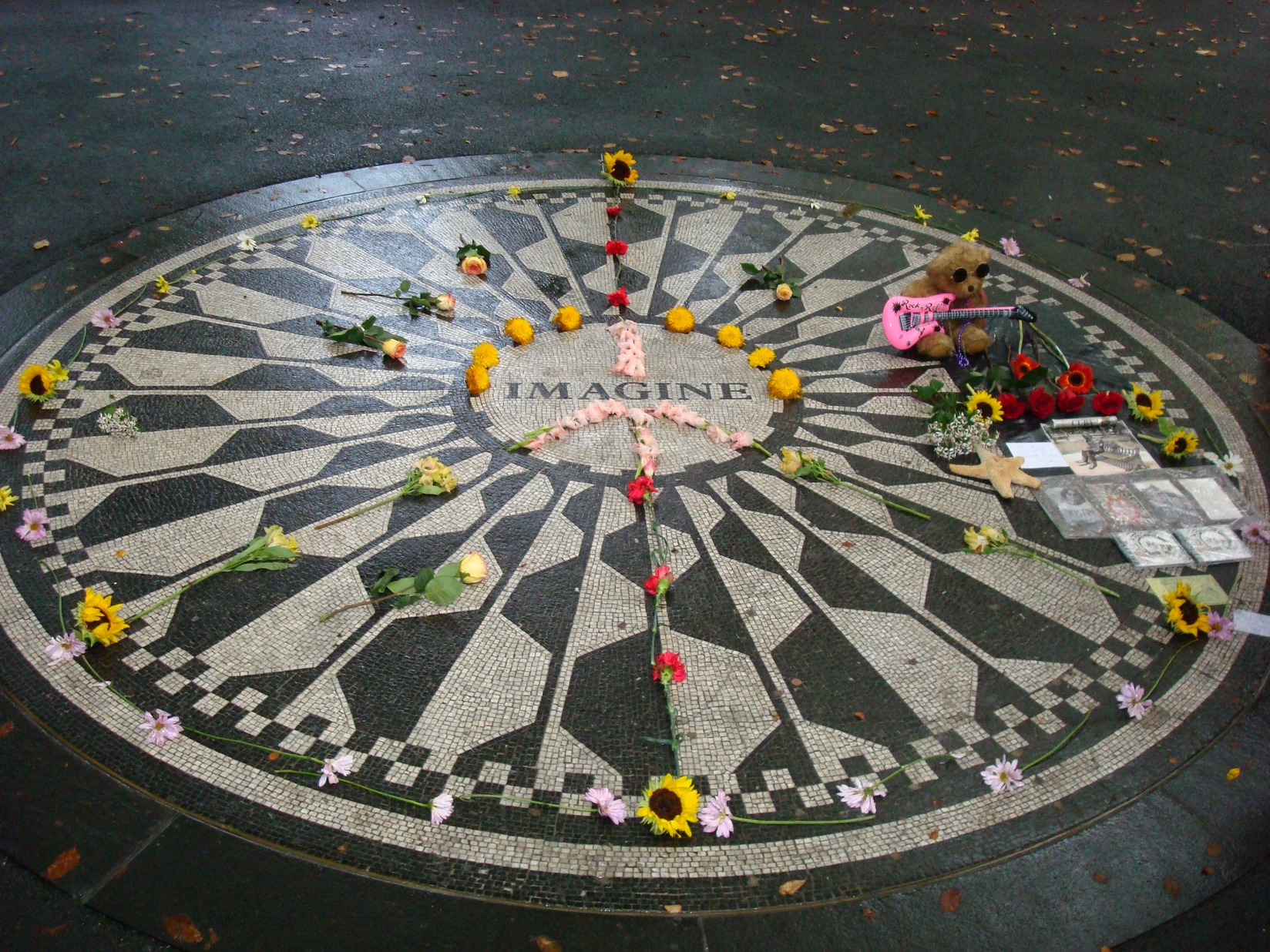 Have you been trotting through the Big Apple? Did it drizzle on you?

Work and Travel U.S. Adventures of a 20-Something Bulgarian

57 comments on “New York – the City That Never Sleeps”