Some months ago, I got the fantastic idea to revive the postcard exchange – in paper. For this reason, I posted a status on Facebook asking people if they would be interested in participating in such an exchange and, respectively, sending me their postal addresses – in a private message, of course. 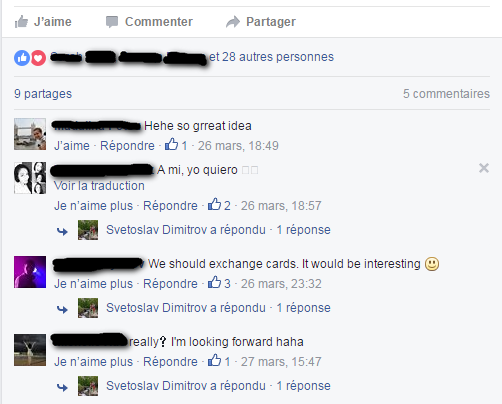 My status received 30 likes and loves and 9 people shared it – not bad for the first try. However, only 5 contacted me. The good news here, though, is that all of them received what I had sent and some of them reciprocated already.

The two girls from Europe already sent me postcards from their own countries, accompanied by awesome messages, which are astonishingly beautiful. Check them out below:

So, my intention of writing this article is to inspire more people to join the postcard exchange which, I would say, is an amazing and thought-provoking initiative. I intend to convince you of something I wrote a year ago. Here it is:

Although I do not do it very often, I am fond of handwriting. It is always better to create something small, tiny, petit(e) than a screed of jibber-jabber. It astounds me how well one can express him/herself on a piece of paper, armed only with a pen or a pencil. When seething with myriads of emotions, the sheet, with all its chastity and charm, could be one of the best objects to ramble upon.

Recalcitrant thoughts crash their waves onto the shores of one of the four inventions of Ancient China. Mes secrets…Tes secrets…Nos secrets…

The notebook is not judgemental, knows no opprobrium, is good at ignoring our ostentatiousness, and can, at the same time, saturate our senses and surreptitiously devoid ourselves of vexation. It {the notebook} can be very chastising, but lecherous too. Meek or rampant. Our hands audaciously strut on its body, knowing no borders. The indomitable, prurient thoughts dance eerily.

The paper neither gives withering looks nor scorns. It does not admonish you in an adenoidal voice, nor does it tremble under the drivel your pen relentlessly invents. In fact, it is curiously agitated to suck in every inch of your sincerity. It is overtly impatient to be regurgitated over by a harangue of truths. Because fooling it only means you are fooling yourself.

Daunting? Mais non, au contraire – very inspiring. Let your adamant hand immerse itself into cathartic sobbing. Sois courageux. Cry yourself on its shoulder. The paper is a sanctum, a haven. Do not stay aloof from your inner side. Letting your most nefarious, felonious or even impious thoughts out could be as cleansing as devouring a whole garlic bulb.

Go ahead, devour the garlic bulb, clash your paper and pen, or do both.”

Alright, I don’t expect you to write me something like that in the postcard you are about to send me. Rather, I was showing the beauty of words – I copied this from a piece of paper, but since my handwriting is not the prettiest I decided to share it here.

So, are you excited about this postcard exchange and you have amazing postcards from your travels around the world? Let’s do it!