Gaudí had a dream to construct a city that will make your jaws drop with every step you make.

To build something that will enter the annals of history and will talestay there forever.

To erect buildings that not only mesmerise their visitors with sheer opulence but also with incredible usefulness.

He was not only a dreamer but also a doer. His most ambitious project was Sagrada Familia – a resplendent basilica that flirts with each of your senses in a magnificently enchanting way.

If you are ready to flirt further, let’s continue this captivating journey through the most breath-taking religious temple.

Barcelona is the only city in the world that has 9 UNESCO heritage buildings. Among them is the glorious basilica Sagrada Familia where the true genius of Gaudí truly flourished, coalescing curvilinear Art Nouveau with Gothic forms.

If you have a penchant for architecture, in and around Sagrada Familia, you will climax at every single detail Gaudí has shaped. And since there are millions of details, you might expect at least a truckload of orgasms : – )

Sagrada Familia, meaning the “Holy Family”, is an architectural marvel of a gigantic magnitude. The basilica is perhaps Barcelona’s most renowned symbol and its imposing spires dominate the city’s skyline.

Despite that Sagrada Familia is not even finished yet, exploring its spellbinding outer and inner beauty is a must. Let’s focus our architecture-thirsty eyes on its inimitable exterior first.

In all honesty, construction work is still ongoing, but by 2026, 100 years after Gaudí’s death, the spectacular religious temple will be complete.

Look at the building as a whole. It has 3 straight façades. The fourth side is semi-circular. This is known as the apse. The three façades illustrate the most important moments in Jesus Christ’s life – his birth, his demise, and his glory.

Sagrada Familia will have 18 gorgeous towers. At the moment, only 8 are ready and 10 are under construction. The tallest one will measure the stupefying 172.5 metres (566 ft). It symbolises Jesus. The towers around it, also under construction, will be 130 m (426.5 ft). They will represent the four evangelists – John, Luke, Mark, and Matthew – spreading the Christian message.

The 3 straight façades are adorned by bell towers – 4 on each one. The 12 dazzling bell towers will be dedicated to the 12 apostles.

When complete, the basilica will (almost) reach the same height as Montjuïc (from Catalan “The Mountain of the Jews”). Just almost. As Gaudí said:

The work of man should never rise above that of God.

The first façade (Birth of Christ or Nativity) has three portals. Each of them is devoted to a member of the Holy Family. The entire facade is a hint of life. 31 sculptures represent the Nativity of Jesus in a realistic style, representing nature.

The façade of Birth was built during Gaudí’s life. There are 32 stunning and skilfully crafted doors by a Japanese sculptor. He also contributed to the sculptures on the Nativity façade. Their motifs are directly inspired by nature.

The three-way façade forms an unchanging landscape where human figures dominate the scene. It might be considered an allegory of the marvels of the developing and constantly altering nature.

The Passion Façade – Representing the Horrendous Suffering of Jesus

It was for a reason that Gaudí did not start with this side first – he didn’t want to distance people away from his work. In stark contrast to the richly decorated Nativity Façade, this one is plain and simple, grim, and engraved with straight lines, resembling skeleton bones.

Devoted to the unbearable suffering of Jesus Christ, the Passion Façade intends to depict the sins of a man. Following the instructions and drawings left by Antoni Gaudí, construction commenced in 1954.

The towers were finalised in 1976. 1987 saw the outset of the sculpting work, headed by the Catalan architect Josep Maria Subirachs. The sculptors aimed at giving Sagrada Familia’s Passion Façade a rigid, raw-boned form, provoking a dramatic effect.

Gaudí’s intention was to instil fear into the bystander. To further exemplify the brutality and severity of Christ’s sacrifice, the genius architect wanted to contrast harsh, rigid light against dark, bony shadows.

The Passion Façade faces the setting sun, which is a symbol of Christ’s demise. The intricate details further contribute to its awe-inspiring appearance.

The most gigantic and definitely most imposing of the three façades will be the Glory Façade or the Façade of Bliss. Construction on Sagrada Familia’s largest and most splendid side commenced in 2002. Devoted to the Heavenly Glory of Jesus, it is a representative of the road to God, consisting of death, final judgement, and glory.

Gaudí was aware that he won’t live long enough to see it finished, so he developed a model. The façade’s completion will necessitate demolishing the complete block with buildings that are across Carrer de Mallorca.

The Glory Façade will be ornamented with idols, demons, heresy, false gods, and schisms. Death and purgatory will also be portrayed. Seven colossal columns will support the portico. They will be dedicated to spiritual gifts – the Seven Deadly Sins will be at the columns’ base, while the top will depict the Seven Heavenly Virtues.

While marvelling the exterior is a truly magnificent piece of experience, exploring the interior of the basilica resembles a promenade through your most audacious dreams.

Gaudí’s intention was that a visitor, standing at the basilica’s main entrance, be able to see the nave’s vaults, the crossing, and the apse. Hence, the graduated increase in the vault’s attic.

When pondering at the top, you will see branches. Notice that the branches reach all the way to the ceiling. In Gaudí’s architecture, every element is symbolic.

The stained glass on the east side of the church is with cooler hues. This is where the sun rises. Warmer hues are kept for the western side. There, the building reminds us of the natural cycles – night and day, the seasons, and life itself. A Catalan artist was commissioned to create the windows, following Gaudí’s guidelines.

Suspended above the altar is the figure of Jesus on a cross. Follow his gaze and you will see the large vault over the apse. There is a large entry point for light, located 75 m (246 ft) up.

The funnel shape was deliberately chosen as it diffuses the light perfectly. “The sun is the most exquisite painter,” said Gaudí. You only have to look around to see that he was right.

After that, approach the four large columns, made of red stone. They are the tallest and thickest of all and are produced of a type of stone known as porphyry. These four columns support the tallest tower of the Sagrada Familia – the one that will be dedicated to Jesus.

The columns are decorated with the symbols of the four evangelists. The eagle for John, the bull for Luke, the lion for Mark, and the angel for Matthew.

On the floor, you will find a mosaic in the shape of a blue circle. Inside the circle are three white initials. J for Jesus. M for Mary. And J for Joseph. The Holy Family.

This is not the only representation of the Holy Family inside the temple. Above the Nativity doors is an image of St Joseph. Above the opposite doorway is one dedicated to the passion of Christ.

Hanging above the altar is the baldachin – a canopy decorated with leaves, grapes, and barn leaves.

Fundamentally, not a single of the interior surfaces is flat. The embellishment of Sagrada Familia is rich and comprehensive, predominantly involving abstract shapes that unite jagged points with smooth curves. Even the most detail-level work – the stairways and the balconies’ iron railings – is teeming with curvaceous elaboration.

What more can an architect wish for than to be commissioned to design a mesmerising church? Ironically, it is in its vicinity where he met his death. And that’s where his remains lay.

Antoni Gaudí – the Architectural Genius Who Outpaced His Time

Antoni Gaudí, one of the most eminent figures of Catalan culture and contemporary architecture, spent 40+ years designing the Temple of the Sagrada Familia.

Born in 1852 in the then second largest Catalonian city – Baix Camp – Gaudí attended a high school where he excelled in Arithmetic and Geometry.

When he was 16, he moved to Barcelona and commenced preparing his entry in the School of Architecture. He joined it in 1873. Uniting his lectures with working as an architectural assistant, he became a craftsman in carpentry, glass-making, and locksmithing.

A man of faith and a worshipper of nature, he became one of the most revered figures in Catalan culture and world architecture. His immense contributions to the discipline were a daring break from the established order – an outcome of his own unparalleled approach.

*I have no affiliate connection to the website. I just found it to be the only one, which does not ask for additional fees.

Sagrada Familia is an amalgam of an inimitable physical experience and a splendid feast for all the senses. God inspires, we only need to let ourselves be guided.

Have you been so mesmerised by a temple before? Where did that occur? 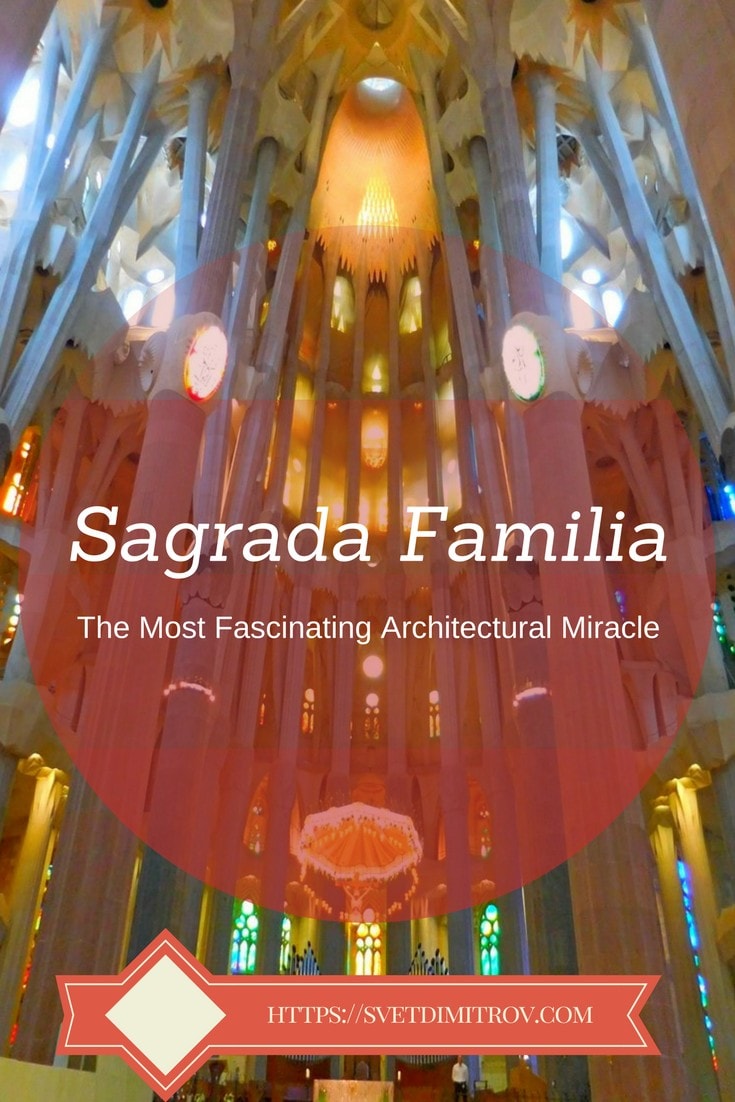 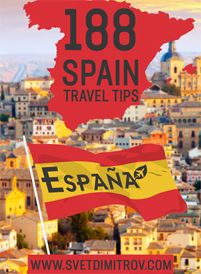 6 comments on “Sagrada Familia – the Most Fascinating Architectural Miracle”