I never had too much of an expectation about Dubai, and the United Arab Emirates as a whole. It has never been on my “to-visit” list, yet I just came back from a journey there. Had it not been for my best friend who works and lives there, probably I would not have visited it (or at least in the conceivable future). I would also have to express my gratitude to Wizz Air, which established a Sofia-Dubai line some years ago, and thanks to that, I got a reasonably priced ticket.

We arrived slightly after 19:00, and less than 30 minutes after that, we picked our luggage. Wow, that was supersonic!

Tsetso, the host, had just made it to the airport and we hopped into his car and headed from Al Maktoum International Airport (a small airport planned to become world’s largest for the World Expo in 2020; the people in UAE are maniacs when it comes to creating large and tall objects) to his place in the Greens neighbourhood in Dubai.

The roads, the buildings, the traffic jams, the distances – everything has a gargantuan touch and a sandy fragrance. Tonnes of enormous cars driven around by an international mix of people.

There’s a tonne of things you can do, and I recommend to spend at least 7 days in Dubai. That’s what we did 🙂

After we dropped our luggage, the host took us to a Lebanese restaurant – Karam Beirut in the Mall of the Emirates – which offers a splendid view of Ski Dubai’s slopes. 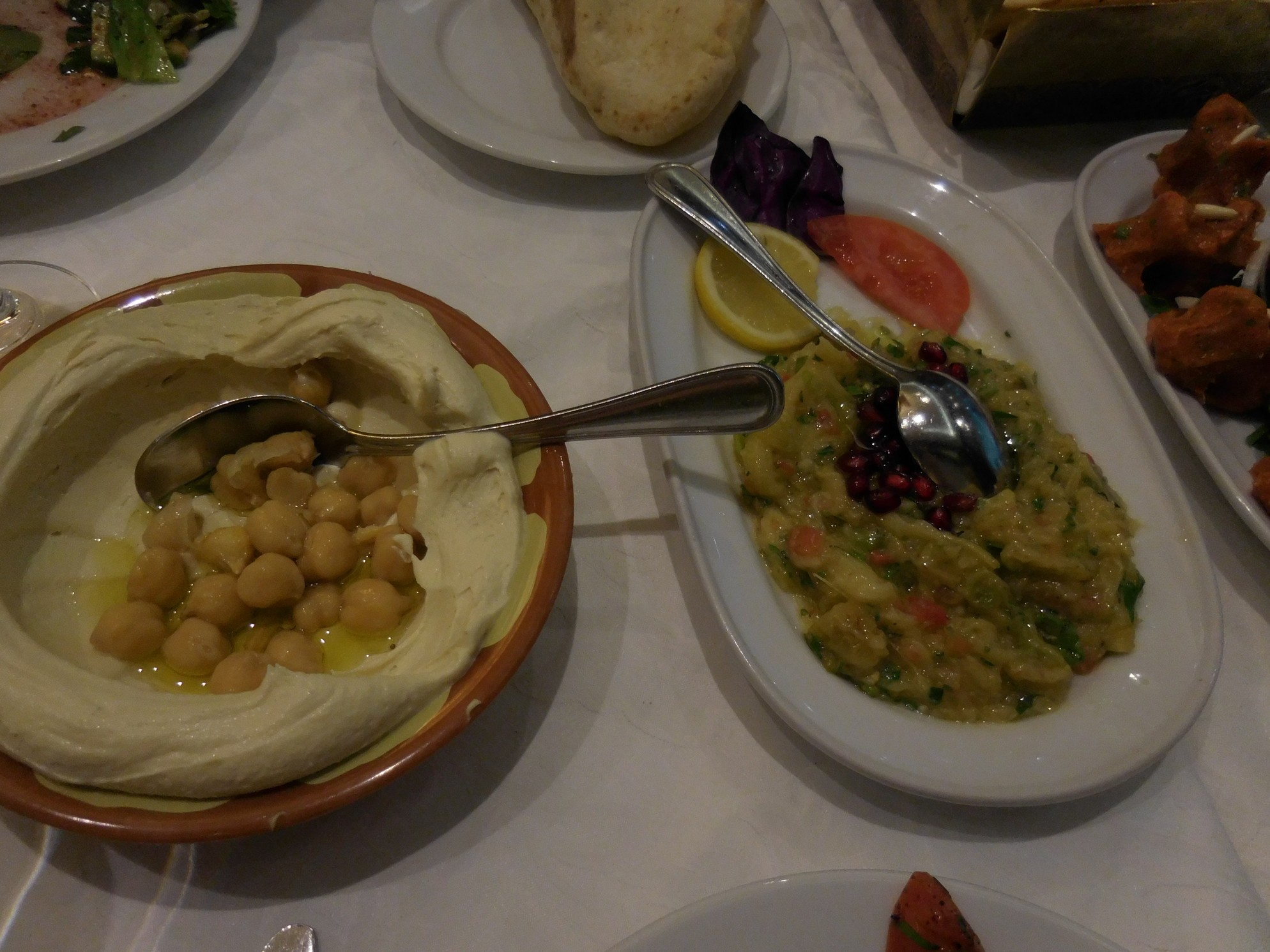 The food was delectable, the service was exclusive, and they even offer liqueur.

Keep in mind that alcohol in the UAE is only available in restaurants and bars that belong to a hotel. Which means if you want to accompany your food with a beer or wine, you would have to search for a hotel – no worries, there’s a host of them in the city.

Desert Safari Dubai – an Adrenaline Boost for All Senses

Dubai is a vibrant business hub, a global, booming metropolis at the tip of the Persian Gulf. If you want to escape Dubai’s hot hug pressed tightly by state-of-the-art skyscrapers, a desert safari is a wonderful decision. That is what we did.

The driver took us from our address, picked the other participants (6 altogether), and we headed to the desert to bash some dunes. It is located at the meet-up of Dubai, Sharjah, and Ajman. The tour takes around 1 ½ hours and Mohammed, our driver, stopped us, along with many other Land Cruisers, at a point where we took mesmerising sunset photos.

The tour ended in a camp in the desert around 18:30 where we unwounded with tea and coffee until the main feast was being prepared.

The programme also included watching a whirling dervish dance as well as belly dancing. The dervish was amazing, but I have seen much better belly dancers.

Sheesha smoking and camel riding are also included in the price (we had bargained for 250 AED or 68 USD), but the camels looked so sad I couldn’t hop on them. The dinner was hearty with a variety of Arabic meals and grilled meats and fish (no pork, sorry).

Around 21:00, the driver took us back to Dubai. Take into consideration that safari riding is a bit dangerous since it is very bumpy and the car can flip over.

Dubai Marina is a district where an artificial canal has been constructed that stretches from the Persian Gulf. It is one of the most expensive residential areas.

Known as the “tallest block in the world”, Dubai Marina prides itself on many high-rise buildings, including the famous Princess Tower which used to be the world’s tallest residential-only building until 432 Park Avenue in New York City surpassed it in December 2015. When the Pentominium is finished, since construction has been frozen, it will claim the first place.

Infinity Tower, also known as Cayan Tower, is located in the Marina too. The tower is the highest building with a twist of 90 degrees. Don’t be too amazed by its shape because my friend told me they slowed its inauguration due to problems with its foundations. Probably not the best choice to live (not the most reasonable too, he-he).

Dubai’s Old Town – Spices, Gold, and Jewellery Blend into One

The Old Town of Dubai is quite an interesting place to see where it all started from years ago. The Dubai Municipality is domiciled there, as well as there a couple of souks (markets) – for spices, perfumes, and jewellery. Burj Khalifa can be seen in the distance. The old port, Dubai Museum, and Dolphinarium are there, too, as is Dubai’s City of Gold.

Dubai is also very famous for the world’s highest building which was constructed by an international team of more than 100 nationalities. You can read more about its interesting construction history and browse breath-taking photos and videos in an article I devoted to it.

Probably the largest mall in the world in several categories, Dubai Mall is adjacent to Burj Khalifa and the Burj Khalifa Lake. Having more than 1,200 shops, it is accessible by Burj Khalifa/Dubai Mall metro station through an air-conditioned footbridge (in summer, the heat in Dubai and the UAE is unbearable so this is a great addition). Its main entrance is located at Doha Street.

Housing an Aquarium, Under Water Zoo, and an Ice Rink, it attracts more visitors than New York City or Los Angeles. Dubai Mall’s contribution to UAE’s GDP is close to 5%. It was also included in the Nat Geo’s Megastructures television series.

If you would like to lie under the sizzling Arabian sun, probably the best place to do that is Kite Beach. Located on the right side of Burj Al Arab, the most luxurious hotel in the world and a symbol of contemporary Dubai, it is a great place to swim, sunbathe, or take a selfie with the hotel (as did many Indians while we were there).

Souk Madinat – a Market with an Arabic Charm

Another place which you may visit, should you desire a great shot (or a selfie) with Burj Al Arab, is Souk Madinat. It is a modern market with an ancient touch which makes it quite authentic and attractive to visitors. My friend told me prices are a bit greater than in other markets or malls, so take that into account.

The Palm – One of the Contemporary Construction Miracles

The last day was designed for a visit to The Palm Island of Jumeirah. It is an artificially created island in the form of a palm when seen from the air. It stretches deep into the sea.

A lot of sand must be rainbowed occasionally to its foundations so that the island is not eaten by the sea. Myriads of gigantic stones (around seven million, to be exact) were dropped around its coasts to construct the breakwaters. It is accessible to anyone with a car.

The right side of The Palm offers a great view of Burj Al Arab and Dubai’s downtown, where Burj Khalifa is located. The Dubai Marina can be seen from the left side of the palm.

Dubai said its farewell with a jaw-dropping sunset which, according to my friends who live there, is a very rare occurrence. Enjoy! 🙂

Have you been to Dubai before? Did you party with the Emirs? 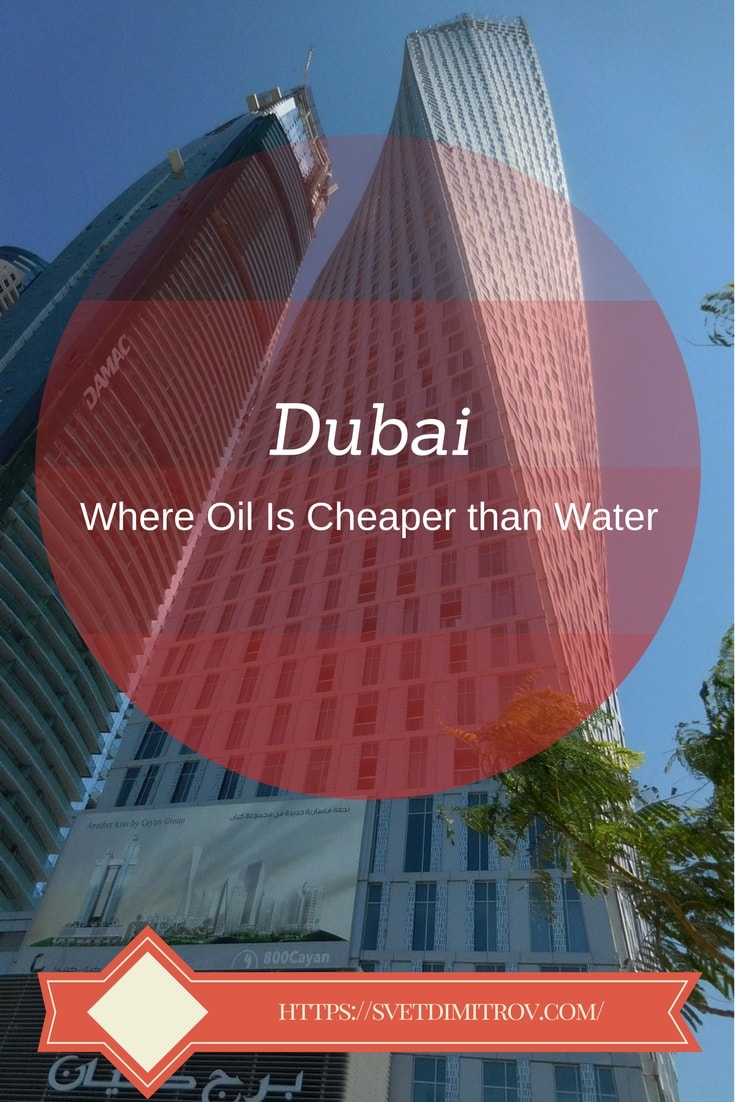 20 comments on “Dubai – Where Oil Is Cheaper than Water”