You have passed through/by a place over and over again, and you have never found it appealing. You have formed an opinion (almost always negative or at most neutral) of the destination and it won’t probably appear on your travel radar.

Unless you are shown to the place by a local. That’s what happened last weekend in Dupnitsa, and I simply fell in love with the town.

Location and Nicknames of the Charming Dupnitsa

The mountainous town of Dupnitsa (also spelt as Doupnitsa) is gently embraced by the drop-dead gorgeous Rila Mountain. Dupnitsa stands at around 60 km (37 mi) south of the Bulgarian capital Sofia. Despite that its population is just around 30,000, it is dotted with multitudes of drugstores which has earned it the nickname “the town of pharmacies”.

Another sobriquet of the town is “The Green and Shady Town” which is due to its location and the fact that it is lined with thousands of trees.

The modern name of the town also derives from its specific location – standing in a valley, hugged by hills and mountains. From a bird’s eye view, it resembles a hole (“dupka” in Bulgarian) – thus the name Dupnitsa.

In fact, the region of Dupnitsa is among the most meticulously researched ones in the country when talking about prehistoric past. Early Neolithic (7,000-6,000 BC) are the first prehistoric settlements from the area. In the Chalcolithic period (5,000 BC), the region has been inhabited – from then are also the earliest traces of human activities.

In the 15th century AD, an Ottoman register mentioned the name “Dupnitsa” for the first time. After Bulgaria’s liberation from the Ottoman Empire’s reign, all mosques have been destroyed but one.

When talking about the fortunes of Dupnitsa, I should mention its inextricable relation with the Rila Monastery which during the entire Ottoman period was located in the “kaza” of Dupnitsa, according to the firmans of the sultans.

The monastery itself carries out commercial and economic activities and owns a variety of properties in the town, and many Bulgarian enlighteners were born there – Atanasii Cholakov, Dimitar Biserov, Hristaki Pavlovich, and Hristo Dimitrov, among others.

Hotel Rila Dupnitsa – Comfy Abode in the Heart of the Town

I was invited to discover the beauties of Dupnitsa by Hotel Rila. The tour included a couple of activities which I am going to dwell on later on.

But first, I will share my impressions of the hotel. Hotel Rila is a proud owner of 49 double and 9 single rooms, as well as 4 apartments. All of them are very well refurbished and spacious enough for a good stay.

These rooms and suites are located on 9 floors and all of them offer amazing views of the town’s centre and the nearby mountains. On the top floor, there are a number of conference rooms which are well-equipped and offer even better views of the surroundings of Dupnitsa.

Hotel Rila’s spa centre, opened at the end of 2015, is absolutely gorgeous and offers a number of facilities for everybody’s needs. They range from an infrared sauna, an herbal sauna, a Finnish sauna, a steam bath, an ice room, and an indoor pool.

To be honest, I tried all of them but what I loved the most was the swimming pool which has staggering photos of mountain sceneries around it which I found brilliant. I will just share one photo from the pool. At the hotel’s website, you can find many more.

The hotel has a cosy restaurant which offers palatable delicacies for dinner, a lunch menu, and a wide choice of dishes for breakfast. I recommend trying the yoghurt – it was mouth-watering.

What to Do in Dupnitsa, Bulgaria

As part of our stay in Dupnitsa, the hotel also organised for us a challenging, but super fun, treasure hunt which took place in the mesmerising park “Rila” just a stone throw away of the town.

The treasure hunt package will be available very soon at the hotel’s website, so make sure to ask them for it if you plan your delightful stay there. 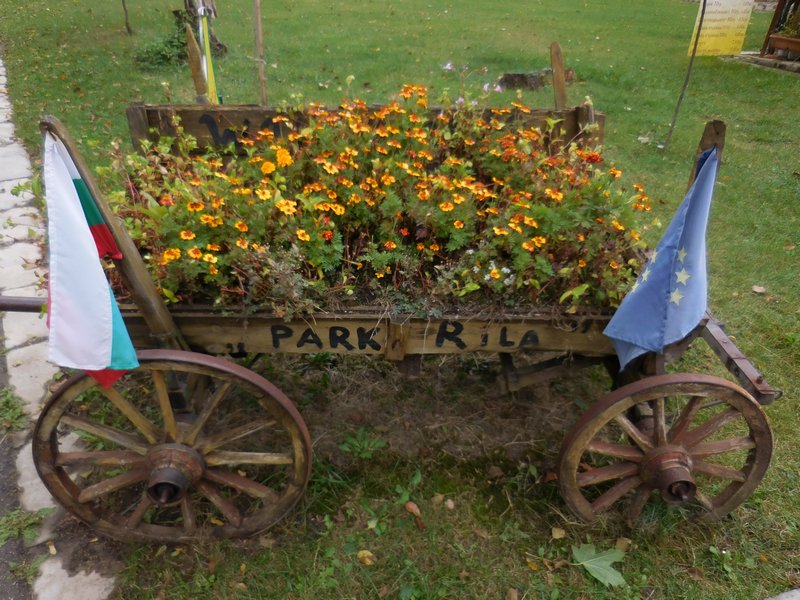 I am not going to showcase what the challenges were, but I am going to share with you some photos of the park which is crossed by a fascinating river. In addition, it also offers several restaurants, an outdoor swimming pool (only open in summer), and a magnificent pond with ducks.

After the treasure hunt (which takes between 30 and 60 minutes depending on your sharp mind and running pace, he-he), we came back to the town where we were taken to see the only remaining preserved mosque (as you saw from the photo above). We also sauntered around the town’s public garden which is overlooked by a clock tower.

Soon after that, we passed by the historical museum which holds archaeological relics from the Dupnitsa region, and we also visited an ethnography exposition in a house that belonged to Zhelyu (a partisan) which was quite interesting.

Where to Eat Your Heart Out in Dupnitsa

After all this wandering around, we grew hungry and on our way back to the town’s centre, we stumbled upon a wonderful petite restaurant called Bar Moda. The owners of the place greeted us with beaming smiles and made our stay “scrumptious”.

The place has a unique charm and offers Italian beverages, ranging from Italian beer to aperitivi and digestive (aperitifs and digestive), as well as fresh salads with delectable mozzarella, sprinkled with Sicilian olive oil and Balsamic vinegar of the highest class.

What made our late lunch even more delicious was the one-of-a-kind attitude of the staff. I highly recommend visiting the place.

*On a side note, it is not so surprising that we encountered a place like this there as the town of Dupnitsa is often regarded as “The Little Italy of Bulgaria”. This nickname is owed to the fact that many of the town’s citizens over the years have been working in Italy and each summer they would return home.

Around the Region of Dupnitsa

The region around Dupnitsa has tonnes of things to do and visit. What we did last weekend was visit the Rouen Monastery and the Stob Pyramids. Both of these places are around 20-30 minutes by car from the town.

The Rouen Monastery near the village of Skrino bears the name of the Saint Ivan Rilski, the founder of the largest monastery in Bulgaria – the Rila Monastery (which is also quite close to Dupnitsa). It is one of the newest monasteries in the country since it was constructed on the remnants of another ancient monastery.

From the Rouen Monastery, you can take hikes to:

„Стобските пирамиди“ – the Stob Pyramids – are sandstone pyramids near the village of Stob. The majority of the pyramids are 6 to 12 metres in height and 30-40 metres in thickness.

Their needle-like and pointy forms are absolutely stunning a natural phenomenon. Besides, there are some others that are round and have sandstone “hats” thus looking like gigantic mushrooms.

Going there around sunset or contemplating them at moonlight is the best you can do. Here are some photos I took there.

There’s an entrance fee of 2 BGN (1 EUR). The hike from the entrance to the pyramids is around 30-40 minutes and at the top, there is a stupendous view of the Rila Valley.

The village of Stob stands on the road to the Rila Monastery. My fellow bloggers from Follow the Sisters have compiled a great article on sleeping in the monastery so make sure to check it out.

The Seven Rila Lakes – One of the Most Magnetic Places Worldwide

Another amazing place which you can visit should you find yourself in Dupnitsa are the Seven Rila Lakes. The seven lakes have glacial origins and are definitely the most visited group of lakes in the country of Bulgaria (and believe me, there are many groups in the mountains).

The Seven Rila Lakes hike takes around 5 hours – back and forth – so prepare yourself with good shoes. And brace yourself for jaw-dropping panoramas like this:

Dupnitsa and its surroundings beauties fascinated me, and I am sure it will fascinate you. However, if you feel like you’d need some help with navigating around, you can download a GPS version of this article here.

*I’ll get a small commission for that, so I’d like to thank you in advance if you do so.

Have you been to a place which you thought was nothing specific and turned out to be amazing? Where exactly?